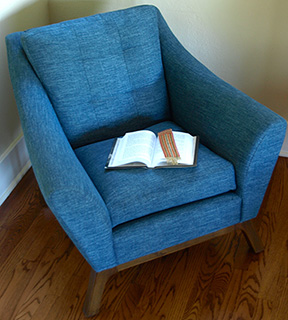 A rolling landscape had been made all of fabrics, with folds of green and brown tarlatans for woodlands, hills of tulle, a blue satin river, and pale linens and muslins shirred into fields of spring growth. Mr. Edwin would have appreciated it. When Isabelle and I cleared out his desk, we found a leatherette box of sketches for merchandise displays, though none as fanciful as the fabric landscape.

There was nothing particularly private about those sketches, nor about anything else in Mr. Edwin's desk, but I didn't like emptying the drawers. I'd never had anything to do with the desk before, except to dust its surface, and there I was throwing away worn-down gum erasers and pen nibs, and his calendar diary and reading spectacles. It didn't help that it was all under Isabelle's supervision. I felt the same when she had me clear away other things that couldn't be sent to charity, like his shaving brush with its splayed bristles and the half-used bowl of shaving soap, and a dressing gown he so favored that the oft-darned cuffs and shawl collar were fraying again. It's things like that--ordinary things that show the wear of common use--which bring home to you that someone is really gone.

I sensed the presence of the river before I reached it. Of course, I knew it was there; I had lived quite near it for a year. But it was more than plain familiarity with the river's existence that informed me. There was a difference to the atmosphere, a coolness apart from the winter evening's chill, like a bassoon behind violins. There was, too, an opening up of space, a feeling that some large edge was close at hand. Lights were fewer ahead; sounds broke up, spread out, and died thin.

Perhaps, however, it was only my state of mind that made the approach to the river so suggestive. Isabelle Martin awaited me there, and the course our meeting might take was anything but clear. I could have said the "notorious" Isabelle Martin, for she had been called that and more--evil, conniving, immoral. (To be fair, there were those as well that called her better things, like tender and diligent.) It was her house near the river in which I'd lived that year, hers and her husband's. And more passed there for all three of us than some folks meet in the full of their lives. For though everyone encounters death somewhere along their way, few are acquainted with murder, and fewer still accused of it.

The train from the country had been late, and the progress of the crowded streetcar was maddeningly slow, traffic being busy and the horses decrepit. The Society for the Prevention of Cruelty to Animals kept special watch on the street railway lines, but the sad pair pulling our car had escaped their vigilance. As we rattled through the press of trolleys, delivery wagons, omnibuses, and dashing pedestrians, I was repeatedly jostled against my neighbor on the overhead strap; he had had garlic for supper.

When, at last, I got off the streetcar, I still had a short distance to walk to reach the Delaware River piers. It was an area of wholesalers--teas, candles and lard oil, spices, wool--but I passed a few shop fronts, too, all closed for the night, their window displays only dimly visible in the light from the street lamps. A dry goods window caught my eye nevertheless and was cunningly enough done to make me stop and study it a moment, late as I was.