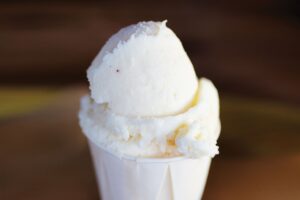 A pregnant woman lolling in the bath, if she be thoughtful, is subject to shock, fear, and a backward look at herself that is at once bitter and sweet.

Shock comes with a heartless appraisal of this rounded, no, we said heartless, this bloated lump of female anatomy.  Never mind noble praise of motherhood, this is a woman remembering girlhood, womanhood, and adventures of body and spirit that must have belonged to some other self once, long ago.

She marvels at these limbs once so slender and so quick to carry her on journeys of joy.  Smiling softly, not seeing their swollen contours any more, she recalls an incredible self on a wartime night when all, all was black, and a bar was the only light in the whole damned world.  With a pain like loneliness, she recalls a wild hunger that night, a driving, thrusting thing within her as she walked into that bar alone because the hunger in her was for something hard and cold and brutally satisfying.  She wanted a strange man.  The intellect retreated before the animal force that drove her.

So the bar was bright and the drink was hard and the man was strange, but miraculously, the brutality and its anesthetic melted when a shabby door closed two human beings in together with their needs, and the need was not for brutality at all but for tenderness.

She sought an attack and he a conquest, but with a simple reaching out for one another, they found in surrender compassion and balm.  They wanted forgetfulness but found instead memory, he of a stout wife across the sea and she of a blond boy in Italy.  In remembering, in loving, in gentle conversation before dawn, they were soothed and strengthened and restored.

The woman in the tub looks back and is warmed.  She wonders, too.  How many spirits does this human form contain?  Could that girl in a dismal hotel room with a man never seen before nor seen again be the same person who sleeps, satisfied, with the same man for 17 years?  Slowly, clumsily, because it is not easy to keep one’s mind on such things when the distant cry of a child and the smell of burning pie juice and the ring of the phone intrude, she turns away from homely sounds and smells and brings back the musty, leathery scent of a favorite bookshop on Sheridan Square, the delicate first taste of lemon ice that heralds spring on MacDougal Street and the sound of so many long-forgotten voices as hours flew by at Asti’s on 12th Street, first rehashing and then jumping off from a lecture by Bertrand Russell or Lionel Trilling, and on one thundering evening, Sandberg.

She can still recall that she, too, had much to say on those evenings — but what?  Now steaming faintly in the hot room, one part of her mind notes that there won’t be enough hot water for that last load of diapers, and another part strives desperately to remember even what those hallowed speakers spoke about.  What happened to all that thought, all that philosophy, where was it now?  Why did she have it in her grasp when she was not ready to use it?  Where were the keys now with the years presenting one locked door after another?

Was the woman of yesterday a completely separate being?  Or do the dim figures of other people in other places still influence today’s woman?

These fattened limbs could no longer entice a strange man in a bar, but won’t that distant embrace help a woman understand the passions of her own daughters?  Couldn’t the lost rebellions and buried arguments be ghostly reminders when her own young rebel and defy, so that she may be free to free them to attend their hero’s lectures, to taste their own special lemon ice and sleep with someone for their own very special reasons, and finally to come in their own way to a day of hot water nostalgia where they might find that that is what it’s all about.

Previous Post: Story of the Month: The Name
Next Post: Poem of the Month: A Plea to Words…on my friend’s birthday by Dorothy Dellabough