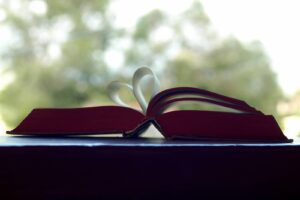 Writing is both an extremely solitary occupation and an activity that presupposes the existence of an other — the unknown reader.  I don’t write to seduce or even, necessarily, to please this reader; nevertheless, by the very nature of writing, I am constantly addressing her, inviting her to walk with me a while, to trust me enough to follow my map even if the ground is familiar, to see what I notice and listen to what I hear, to open her heart to invented pains and joys as fully as she does to those in real life.

The kind of readers who join book groups are the perfect hiking companions through a writer’s claimed landscape.  Metaphorically speaking, they know enough of botany and geology to appreciate the curve of the hills, the shadowy undergrowth of the fens, and the sweep of the beaches.  They see the forest and the trees.  They have, too, a firm purchase on human nature, both their own and various fictional representations of it, so they are able to judge a story’s people (and a person‘ story) with acumen and sympathy.

But above all else, they care.  They take the time and the energy needed for caring and give it to a book as they would to a friend.  They invest their reading and their discussions of what they have read with true passion.  They’re willing to spend their emotions and their intellect with openhanded generosity.  A casual observer of one lively  book group meeting remarked with amazement on the involvement of the members with the book at hand, as if, he said, the characters under discussion were “real people they knew.”  Though it was not meant as a compliment, I think the group can take it as such, for it is testimony to their success as readers.

It seems to me that the members of book groups think like writers.  They are acute observers.  To each book, they bring what they already know of both books and life, and, as importantly, they bring an openness to learning something new — not learning in a dull, moralistic sense, but learning as discovery.  They are willing to let what is unformed within them well up and take shape in answer to words on a page.  Indeed, they invite this to happen.  For the writer, these things occur as the words come out; for the reader, they occur as the words go in.  The book group member then takes an extra step, entering with a kind of joyous bravery into the fray of explaining her reactions, harnessing yet more words — her own and those of her fellow members — to expand and extend the reading experience, and, in an intangible but substantial way, the book itself.

I have modest aspirations.  I do not covet a place on the best-seller list, nor a movie of the week.  What I want for my writing is an engaged audience.  (Not, perhaps, such a modest aspiration after all.)  Engaging them is part of my job, of course, but it’s a great boost to my spirits to know that readers exist who fervently seek engagement — readers who will bring to my work as deep an attention as I spent in producing it.

I don’t know who will pick up the anthology that contains my short story, when someone will read my poem in a literary journal or on my web site, or where someone will curl up with my novel.  I cannot know, either, what personal experiences, bitter and sweet, those readers carry in their backpacks as they trudge through my contrived territory, nor how they will spread their own meaning on my tale — whether they will choose to lay their bedrolls on granite or on moss.  What I do know is that if this reader — this intimate stranger — is in a book group, half the battle is won, for critical but patient ears and eyes will be turned my way.  Private lives will be suspended for a brief span to make room for the lives I have devised.  I couldn’t ask for more.  I don’t.

In the original version of this essay, I closed by directly addressing book group members everywhere.  I imagined you at your meetings, leaning across crumb-strewn tables toward one another, or circled in a living room with books open on your laps and arguments or laughter in the air.  These days, it’s more likely you are alone in your own home, parked in front of a ZOOM gathering.  Or maybe like my own group, who reads short stories from The New Yorker, you’ve temporarily suspended.  Nevertheless, I still want to say to you now what I said in that earlier draft of this essay: keep up the good work.  For it is work, and it is good, what you are doing.  Even if the authors you discuss never know a single word of what you say, even, in fact, if the authors are dead, you are contributing to their vitality and to the longevity and reality of their creations.  You are patrons of the arts, spending the invaluable coin of your minds and your sentiments.  Actions may speak louder than words, but words matter.  They matter very much.  Book groups stand witness to that.