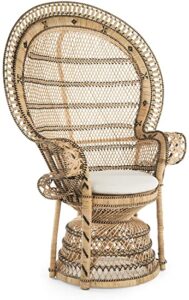 From high school on, I had always wanted a rattan fan-backed chair, and in 1972, in the first year of my first marriage, I finally got one.  My husband, a fledgling sculptor then, had struck a deal with the owner of The Door Store, a hip furniture retailer in the Georgetown section of Washington, D. C.: a statue in exchange for two chairs.  We each chose one.  My decision was swift.  My chair was from India, made of tan rattan with decorative geometric details woven throughout in black rattan.  It had an hourglass-shaped base and a large, fantail back.  It was the only one in the store, relegated to a far back corner, incongruous among the crowd of streamlined modern chairs of teak and molded plastic and curved, padded silhouettes.

I’m not sure where the longing for that chair originated.  The furniture in my childhood home was basically colonial.  The homes of my parents’ friends were Danish modern.  A fan-backed chair was featured in the 1960’s television show “The Addams Family,” as a throne-like seat for Morticia, but I’d never watched that show.  Scanning the Internet, one can find any number of movie stars and celebrities posed in fan chairs — Katherine Hepburn, Bette Davis, Trader Vic, Brigitte Bardot, Huey Newton, Truman Capote, Al Green, Dolly Parton, Marlene Dietrich on John Wayne’s lap.  Perhaps photographers liked the way the chair’s high, rounded back framed their subjects’ heads.  But at the time I longed for and obtained my chair, I was unaware of these pictures.

Wondering about it now, I think my mysterious longing was tied to other, less specific longings.  I think, for me, the chair symbolized the romance of faraway places — lush tropical islands, or hot African cafés like Rick’s in Casablanca, or the shadowed verandas of steamy South American coffee plantations.  It attested to my belief that some day, somehow, I’d get to places like that.  Some of that romance seemed to rub off on people when they sat in the chair.  Invariably, they sat up straighter, draped their arms languidly over the chair’s arms, remarked that they felt like kings or queens.  A friend who drove our belongings across the country from Philadelphia when we moved to Los Angeles sent us a photo of himself seated in the chair on a rocky ledge with the Grand Canyon as magnificent backdrop.  He’d had to partially unload the truck in order to wrestle the chair out for that photo.

By the time of that move, I was with a new man, not the husband who’d procured the magical chair, and we had a young son.  The chair had lived with me in three different houses and one apartment.  Its style never fit with any of my other furniture, even though my tastes were eclectic.  But it didn’t need to fit.  It was its own environment.  It tended to dominate small rooms.  It was more comfortable than it looked, certainly cooler in the summer than leather or upholstery.  And even as it grew a bit shabby over time (its inaccessible scrolls collected dust), it remained resonant of something beyond itself.

Later, when cheaper, less elaborate versions, commercially dubbed the “peacock chair,” were plentiful in stores, I sometimes wanted to say, “You know, I got this chair before they could be had easily and in a climate where it didn’t belong and in a personal, unorthodox way.”  But I didn’t say it.  I could imagine no other response to such a declaration than “So what?”

Today, my chair is considered “retro” or even antique.  I have read that such chairs invaded Britain from India in Victorian times and became popular in the United States in the early twentieth century, enjoying a brief revival of popularity in the 1960’s and 70’s.  Much to my surprise, on-line sellers of “authentic” peacock chairs repeatedly state that “no 1970’s room or hotel would have been complete without one.”  I moved among hippies and other counter-cultural types in the 1970’s, yet I never saw a peacock chair anywhere we frequented, and I never thought of my owning one as part of a fad or trend.  Quite the contrary, I thought I was being unique, even bold.  Perhaps this small vanity was part of my continued attachment to the chair, a statement as I drifted into more traditional roles that I was still a rebel of sorts.

Strangely, I can’t remember where the chair finally went.  It never resided in my present home, where we’ve been since 1987, though it was in the house before this one.  So I must have shed it in that move.  I guess I had outgrown it.  Did I give it to someone?  Who?  I can’t imagine I sent it to Goodwill.  My husband doesn’t remember, either.  But then, it wasn’t “his” chair, trailing youthful aspirations and nascent self-definitions, serene in its own identity and dignity no matter who was sitting in it.   Perhaps it is serene and dignified still, ensconced in someone’s living room somewhere, or preening on some hopeful someone’s e-bay page.